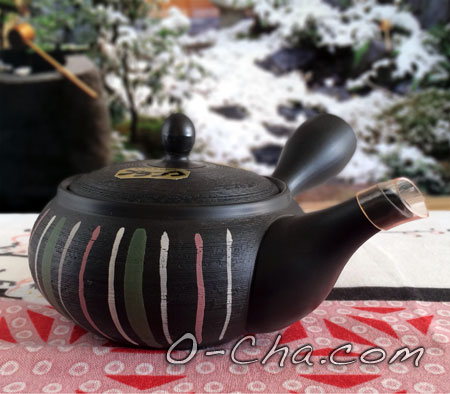 A Tokoname teapot is often synonymous with green tea.  Tokoname ware has a long history and tradition which dates back 900 years. Redware was invented in the early 1800's which developed into the production of tea-ware like teapots and cups for green tea. In the 1900's mass production was introduced which resulted in new production systems and improved kilns that produced ceramic pipes, bowls and jars. Today, Tokoname produces a wide range of ceramics from construction tiles and sanitary ware to table ware, vases and art pottery some of which are available here.

In Japan there are six ancient areas of pottery-Tokoname, Seto, Echizen, Shigaraki, Tanba, and Bizen of these, Tokoname has the oldest and largest kilns. From the beginning of the Edo period until today, Tokoname has played an important role as the leading kiln site which produced most of the red earthenware teapots sold in Japan. Pottery products were then transported to every corner of Japan thru the port of Tokoname. The Tokoname kilns are believed to date back to about 1,100 A.D., and are probably the oldest kilns in the history of Japanese ceramics. An estimated 3,000 kilns existed throughout the Heian and Kamakura periods (794-1333) and their remains have been discovered in various places, from Hiroshima, east and northwards to Aomori. Items found at these places are mostly from vessels for Shinto or Buddhist altar rituals including pieces used at graves and sutra-mounds. The early Tokoname ware was coarse grayish clay, burnt dark brown all over. It is rough in appearance and concept and stands out powerfully and masculine. All old piece are partly covered with green ash glaze which runs down the side in three or four places. Since the products from the early Tokoname kilns in the Heian, Kamakura and Muromachi periods (794-1573) are mostly vases and jars, it was once thought that production of early Tokoname ware was limited only to these two shapes. However, Yama-Chawan (mountain tea bowl) was fired in great quantities and mountain tea bowls have been found at many kiln sites. The style of the mountain tea bowl is coarse in appearance and its trumpet mouth rim is not tapered but terminates in an abrupt 90 degree lip edge. The base of the tea bowl was formed separately and attached to the body later in the process. In addition to the above pieces, large flat bowls, dishes, roof tiles for Buddhist temples, lipped bowls, cooking pots and various other utensils for daily. These items were produced and fired in anagama kilns (tunneled sloping Kilns) located along the ridge running through the central Chita peninsula. These products of the Heian and Kamakura periods (794-1333) are mostly fine pieces.

In the Muromachi period (1392-1573), pit kilns were replaced by surface kilns at Tokoname village. Clay vases and jars containing iron oxide were fired and burnt black all over, showing one of the characteristics of Tokoname ware. During this period, Mizuno Kenmotsu, better known as Lord Tokoname, cultivated the friendship of such prominent men as Rikyu, Sokan, and Myokian Hoshuku to whom he introduced many fine Tokoname vases of earlier periods. One of the most famous pieces is a water jar once owned by Rikyu. It was named "Fushiki", and has been handed down for generations in the Sen family. This Tokoname jar was produced in the late Kamakura period and as the tea ceremony gained popularity during the Edo period, water jars of the "Fushiki" type were made in large quantities in Tokoname.

Watanabe Yahei, who was active during the Tenmei era (1781-1789), was appointed the title of "Tokoname Genkosai" by Lord Owari. Watanabe was the first potter who singed his name to Tokoname ware. There were many potters who produced utensils for the tea ceremony in the middle of the Edo period, with Kamimura Hakuo being one of the representative potters of this group. He was active during the Bunka era (1804-1816) and associated with cultured men in Kyoto and Edo. He used two names, either "To Hakushi" or "To Hakuo" in signing his work. About the same period, Priest Seishu, who was the 8th generation of the Soshinji temple, had his own kiln within the precinct and made low fired pottery. He instructed both Ina Choza and Akai Tozen, who became prominent potters of Tokoname ware thereafter.

Tozen was a special potter who made a pottery wind furnace for Lord Owari and thus he was given the title of "Master of the Wind Furnace, Akai Tozen". Tozen II and Ina Choza II, originated the "Mogake" glaze where the bisquit ware is partially covered with seaweed, then fired in the kiln, leaving red markings. Many excellent potters made remarkable progress from a technical artistic point of view. It was in this age that the nobori-gama (sloping chambered kiln) were introduced in the Tokoname village which is used to produced small delicate pottery vessels for the Chinese style green tea ceremony.

By the end of the Meiji and Taisho periods, Tokoname ware played an active part in the Japanese ceramic industry, giving rise to many artists. After World War II, the potters in Tokoname were producing mostly the I-hsing type ware. The present day artists of Tokoname are divided into four groups, the Japan Traditional School, the Japan Art Exhibition School, the Craftsman School and the Modern Art School Production of sculptural pottery which has flourished since the Meiji period until today as a result the Tokoname Sculptural Pottery Group has a large membership.

When looking for a teapot for green tea, you certainly can't go wrong with a Tokoname teapot.